Note: The special training balls are no longer available. You may be able to purchase a variation of them from Amazon. You can use regular golf balls with the CMP (it was designed for use with normal golf balls) 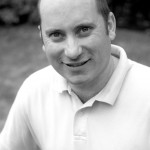 G'day. When I started teaching people how to play better golf by trusting their instincts and natural learning system, I couldn’t help but test their short game. And here’s what I found.

My clients, when taught how to automate their game, had pretty good hitting and putting skills. They had a repeatable swing and were able to putt fairly well.

This is my observation by the way. If you asked them they would say they were terrible at all areas, but this is another story entirely.

What was incredible was getting them to chip some balls towards a target. This really hit home to me how important the short game is.

Where previously I saw a rhythmical golf swing or putting stroke, the chipping action was horrendous.

Golfers would flinch, duff and scull the shots all over the place. Of the hundreds of lessons I gave, I can’t remember anyone who had better chipping skills than their putting or full swing. Nobody! At my indoor teaching facility, one pupil when attempting a small chip, took this massive backswing and then one ugly swipe at the ball. Somehow, he managed to miss the net and hit the window frame at full pace. I don’t know how the large window didn’t break.

It was one of the worst attempts at a golf stroke I've ever seen. I was in disbelief that someone could get such a basic shot so wrong - but over the journey I've seen many golfers struggle with the chipping game. I'm confident in saying that chipping is by far the worst skill for most golfers.

Poor chipping leads to poor scores, a lack of confidence and no way of maximising your talent/potential.

No matter how many times I tell a golfer to play the chip shot off the back foot he won't do it. They stuff up and continually struggle - yips, shanks and duffs are the norm. This doesn't happen all of the time, but it has happened so often I needed to find a cure...

I thought about a solution for ages, but nothing came to me. Then one night, out of nowhere, an idea came to me. I dreamed up a little device that would stop the rot once and for all. I jotted down a design, raced it over to my brother and the next day he had a working prototype for me. It worked so well that I started production. 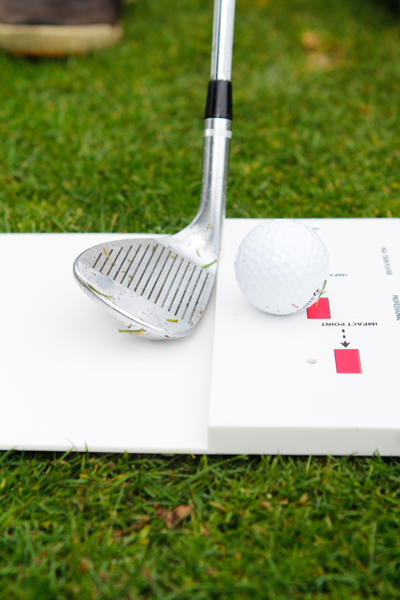 Here's how it works.

There's a little ledge just behind the ball. If you strike the ground first (like many golfers do) you'll strike the ledge. This won't hurt but it will give you a jolt. You'll know instantly that you've done something wrong and from here you'll naturally make an adjustment.

Your objective, should you choose to accept it, is to strike the ball first and THEN the ground (slightly in front of the ball). There are clear markings on the Chip Master Pro to guide you, plus there are three different levels. The pro level is super tough that will definitely challenge you. I tested this on some of my golfing mates and they certainly struggled with it. I still find it amazing how many golfers really don't understand chipping. Even some good players would take huge strides with their game if they could only chip better.

Like all my training aides the Chip Master Pro is simple. But don't let simple fool you as I think I'm really onto a winner here. After a few minutes chipping with the CMP here's what you'll find.

Just recently I've shown the ChipMaster Pro to a number of golf professionals and they were mighty impressed at how it worked. They loved the feedback it gave and enjoyed hitting from it. Not sure why, but the pro's also like hitting the ledge and getting a laugh from the little jolt they got. Strange lot these golf pro's.

I'm talking this device up but it has turned out brilliantly well. When I tried the first prototype I was chipping balls in the front yard. The old guy from across the road was watching and couldn't help himself - he came over to give it a go and said to me "I'm the worst chipper in the world".

Like many, he started with the ball too far forward. He it the ledge. Ouch. We reset and tried again. Whack, straight into the ledge. This time he moved the ball back. The hands went forward and he struck the ball with a very slightly descending blow. The sound of club hitting the plastic mat told us the shot was perfect. The ball popped into the air and traveled a few metres in front of him. Note: I didn't tell him to shift the ball position - he did it all by himself.

The old man smiled. He had just learned a better chipping technique in 3 shots. I wish I had another sample to give him but I'm sure he'll be knocking on my door when the first batch arrives. For me this is like magic - I didn't have to tell him too many instructions - he learned a better technique all by himself and I knew the Chip Master was a winner. A great coaching session that gets me excited to help more golfers.

One of the beauties of this device is you can use it with and without golf balls.

If chipping has been a problem for you then you definitely need to get a Chip Master Pro. It's a great device and something I'm really proud of.

After playing around with this for a few weeks now, the CMP can be used for lob shots (unbelievable when you get it right) and pitch shots. I'm not going to encourage you to hit shots too hard from it because striking the ledge may hurt. But in time, you'll be able to learn all shorts of miniature shots that will help you develop a better short game.

Works for all sorts of chip shots. Lob wedge, 9 iron and even the 6 iron. Really helps you focus on getting nice and consistent contact time after time. Also comes with training manual and when I get a chance, I'll shoot some video on how to best use it. 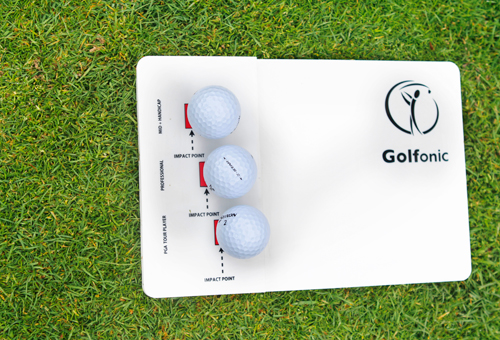 The Chip Master Pro - a great device for learning a better chipping game.

All pricing in USD