You can’t be a cynic (Cameron has a troll)

Let’s do some straight talking.

You may or may not be a fan of me, www.GolfGooRoo.com or my Automatic Golf theories. And if you’re not a fan or not interested that is fine with me. I promise I won’t hold a grudge.

But, if you’re struggling with your game. If you’re frustrated, confused, fed up with your golf you can’t be a cynic. You can’t ignore everyone. You’ve gotta take a leap of faith with someone. Actually. I suppose you don’t. You can keep doing what you’ve always done, but don’t expect improvement to come your way.

If you really want to play better and you’ve gone down the traditional path (new clubs, new swing theories, tips and tricks etc) and failed, you’ve gotta buy in with someone. And it better be someone offering something different.

I haven’t been blogging much of late because I’ve been focused on expanding my theories to a much wider audience. And like golf learning, there has been some ups and downs. I doubt myself. I get a surge of confidence. Then something bad happens…

… like over the last few weeks I’ve had a troll (if you can be bothered, see image below). Old-mate has it in for me. At first it bothered me because this is all very new to me. But then I realised that negative comments are part of this game.

So I’ve embraced the negativity as a sign I’m doing something positive. I’m helping golfers in a different way to the norm and there will always be Shitweazels who won’t like that. And a percentage of those critics will spam, troll or just be a right pain in the arse. Whatever!

The point here is you’ve gotta be prepared for anything. Whether it be your golf game, your business or personal life. You can’t be overly sensitive and you certainly have to be open to learn.

So, I’m asking you not to be a critic. I think we can learn from everyone. I’m reminded of a time that I invested in a fairly strange US golf scientist. He turned out to be a little bit on the wacky side, but I learned a lot from him. Most notably, to look at things differently and don’t be afraid to challenge the status quo. The fact is, if you aren’t getting what you want, then you need to do/try something differently.

And this is the hard part. It’s easy to criticise. It’s easy to stay still and do nothing. But it takes courage to open your mind and ask, “what can I learn today?”. And if someone has spent a huge part of their life committed to a cause, they can’t be ALL full of shit. They’ll have something worth taking on board.

Steady get’s it. He is my longest serving client and this week he made the effort to come visit me.

Now Steady knows a lot about Automatic Golf – he has read all the books and he mentors a few golfers on the principles. But like us all, he’s still learning and on the 3rd tee I saw something I didn’t like.

Me: Steady, do you mind if I coach you a bit mate?

Steady: Go for it. I’m keen to learn.

Me: What the bloody hell are you doing? Why are you rushing and why did you tee your ball up there?

I threw the book at him. And I can do this because I know him well and he understands me. I also needed to shake him up a little because he had slipped into some bad habits.

And this is what separates Steady from the critics. He didn’t get upset or mad. He thanked me and applied what he learned. And I have absolutely no doubt whatsoever that he’ll be able to take yesterday’s coaching and go deep with it.

He’ll certainly improve.
He’ll reignite his passion for the game.
He’ll play with more certainty and confidence.
And there’s no doubt he can keep learning and shooting lower scores.

It would have been easy for Steady to stay at home and avoid the 3 hour drive. He could have stayed on the couch and pretended that he didn’t need any coaching. But he took a leap and was open to learn. I certainly put him in a headlock but it was well worth it.

Wanna know what I coached him? I did nothing else but covered the topics that I talk about at length over here. The video is about 60 minutes but it will certainly allow you to make a huge mental shift. Don’t be a cynic. Take some time out of your day to watch.

I have a Troll! 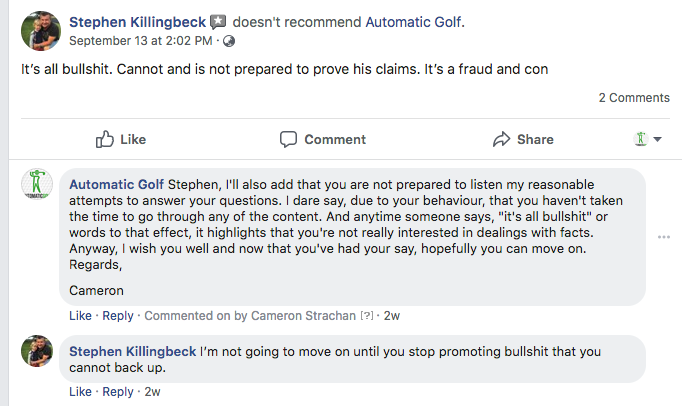 You are about to access the bonus content for your purchase. Here, I am going to reveal some of the most important findings I've gleaned in helping over 10,000 golfers become more automatic with their putting game.

This page is bonus content and it comes to you at no charge. If you proceed further you are agreeing to my terms and are waiving your right for a refund. If you are unsure, please don't proceed further.